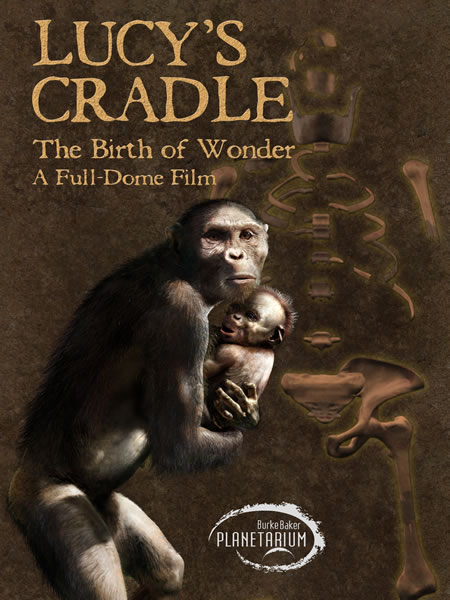 Lucy's Cradle: The Birth of Wonder

Over a hundred planets and moons orbit the Sun, yet only Earth appears to harbour life. What are the conditions required for life? Are solar energy, a protective atmosphere and liquid water enough? How important are stable continents and long-term environmental changes? What combination of factors caused life on Earth to arise and evolve intelligence?

Based on the genetic diversity of human DNA, all modern humans can be traced to an original population in East Africa. The Rift Valley is a unique location for the discovery of ancient hominid remains, where moving continental faults have exposed sediments of ancient lakes and rivers - and the precious fossils of our earliest ancestors.

Lucy lived here 3.2 million years ago, when a changing, drier climate was replacing rainforests with grasslands. Lucy was the height and weight of a modern ten year-old girl and fully bipedal. By walking upright she could look over the grassland, cover longer distances, spot predators and regulate her body temperature more efficiently.

Lucy's Cradle: The Birth of Wonder chronicles these human advancements in an unforgettable 360˚ experience: from East Africa to ancient obelisks pointing at the sky to modern mountaintop observatories. Modern science is continuing an exciting adventure of human exploration that began over 3 million years ago when a young female hominid peered over the grassland of East Africa and saw the distant horizon beyond her fingertips.

Preview the entire film below, download the narrative script with images here and teacher's guide here.